The World Bank defines FDI as ‘net inflows of investment to acquire a lasting management interest (ten per cent or more of voting stock) in an enterprise operating in an economy other than that of the investor’.  FDI comprises funds provided by the foreign direct investor to the FDI enterprise as equity capital, reinvested earnings and intra-company loans. Attractiveness of a nation for foreign investments in any sector is judged by its ‘FDI Confidence Index’ which depends on various factors such as stable policy, favourable investment climate, structural adjustments, economic freedom and a fair market access. India fares rather poorly on this account.

Defence industry is generally considered to be an instrument of national sovereignty and pride. Today, India has 39 Ordnance Factories and eight DPSU. Till 2001, private sector was not allowed in the defence sector. Ammunition and spare parts were in short supply during the Kargil war due to international restrictions on selling arms while hostilities are on.  In May 2001, the defence industry was thrown open to the private sector. The Government permitted 100 per cent equity by the private sector with a maximum of 26 per cent FDI component, both subject to licensing.

A 26 per cent holding allows the foreign partner only a veto over major policy decisions. Were the FDI cap raised to 49 per cent, the foreign company would still not control the company or the board, but would be able to repatriate a higher share of the profit. A significant FDI limit rise would be if foreign companies were permitted 51 per cent or above. And were 100 per cent FDI permitted, foreign entities would be able to buy out Indian companies in full.

The policy environment framed around FDI in the defence sector was such that a prospective foreign investor is expected to invest his resources in a venture where he has no significant control, faces strict capacity/product constraints, gets no purchase guarantee and has no open access to other markets (including exports). As such, unattractiveness of the policy became evident in a short span of time. By 2004, Defence Minister George Fernandes was forced to admit in the Lok Sabha that India had received no FDI proposal till then.

India’s defence spending, on the other hand has been increasing. Since there are no domestic arms manufacturing capabilities, imports increase, putting pressure on the current account deficit. See figure below: 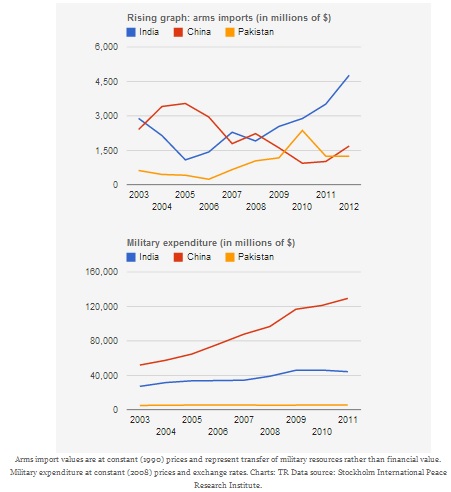 In 2010, the Commerce Ministry circulated a note recommending the raising of FDI cap to 74 per cent to encourage ‘established players in the defence industry to set up manufacturing facilities and integration of systems in India’. It was vehemently opposed by the interested parties, with Ministry of Defence (MoD) insisting that the 26 per cent FDI limit should be retained. In May 2013, modifying his earlier proposal, Commerce Minister Anand Sharma suggested that the upper cap be raised to 49 per cent as a first step. It has also been shot down by the MoD. However, the MoD has suggested that higher FDI may be considered for modern and state-of-the-art technology by the Cabinet Committee on Security on a case to case basis.

There is no doubt that there is need for significant investment in the sector. FDI in defence during 2000-2014 has been a meagre $4.94 billion of the overall $322 billion inflow. Private sector participation is also unenthusiastic and the public sector is performing abysmally.

Being a sensitive issue, there are polarised opinions around the issue of 100% FDI in Defence sector. News reports show that stakeholders have taken stands that suit their interests. The ultimate question is ‘Should the government use the defence industry as another avenue for creating manufacturing jobs (and saving on arms imports) or should it continue to treat the defence industry as the overprotected and inefficient ‘national strategic objective’?

The proponents of 100% FDI in defence rubbish concerns such as security and protection of indigenous defence industry.

Apprehensions are often expressed that during operational emergencies, foreign investors may shut down their factories and choke supplies to the armed forces.

Presently, India is procuring all critical weapon systems produced/integrated abroad. It is not understood as to how India’s security would get threatened if the same weapon systems are produced/integrated in India. As a matter of fact, indigenous production will insulate India from unilateral imposition of embargos on contracted supplies by whimsical foreign governments.

As regards dependability during crisis situations, no foreign investor can risk loss of his total investment by shutting down his production facilities. Further, all major defence equipment producers follow ‘Global Factory’ concept, wherein various manufacturing functions are spread over a number of locations in different countries. When a major defence company invests in any country, it makes it an integral part of its overall production chain. In such a scenario, it is not easy for the company to shut down any facility and disrupt its worldwide production network.

Most importantly, adequate safeguards can be incorporated while issuing licenses. India can reserve the right to take over the licensed facility under certain extraordinary circumstances of national emergencies. Most nations include such an enabling provision. It is ridiculous that imports are considered more reliable than production in India.

There are hardly any indigenous industries worth protecting in this sector. Despite getting preferential treatment from MoD, defence public sector, has failed to keep pace with technological developments. It thrives on periodic infusion of transferred technology and has developed no indigenous competence at all. Most unfortunately, the Indian military is a captive customer of the Indian public sector and is forced to buy what it produces. With assured orders in hand, the public sector carries on with its lethargic and inefficient manner, without bothering about the quality parameters or the time frame.

Indian private sector companies are not completely against the proposal. They are saying they should get reciprocal access to foreign markets and the government should make it mandatory for foreign companies to transfer technology. L&T (one of India’s biggest private defence companies, which produces critical components for missile systems) said 100 per cent FDI should not be allowed in India unless backed by transfer of technology and giving access to Indian companies in foreign markets.

In conclusion, if at all we want to encourage foreign investment in the defence sector, a controlling stake has to be given to the foreign investor. Foreign investors are not going to part with their closely guarded technology unless they have adequate control over the enterprise and are assured of sufficient autonomy as regards capacity enhancement and access to markets to ensure commercial viability through economies of scales.

Investment Blog for the Indian Markets

Mastering the best of what other people have already figured out.

Thoughts of a teacher & practitioner of value investing and behavioral economics

Inflation is taxation without legislation.

Observations of a varied world..

Magical world of the mind

Adventures of a Kidney Donor

All about paired kidney donation